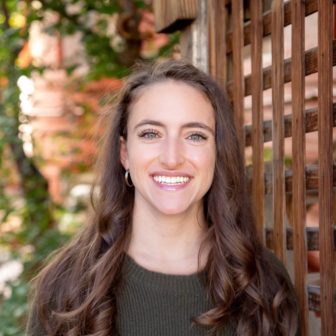 Hannah Recht (Chicago Service Corps, 2017-2018) has a passion for organizing that’s taken her across the U.S. — and abroad! After graduating from Tufts University and working on the 2016 election, she relocated to Jerusalem for a movement-building, Jewish-Palestinian solidarity fellowship and met several Avodahniks. Hannah made the decision to apply for the 2017-2018 Service Corps cohort just a few months before the program’s kickoff and snagged a spot in Chicago, serving at the National Immigrant Justice Center (NIJC).

“Chicago was amazing. I really love the city and had an amazing experience there,” Hannah said. “A lot of my family is from the Midwest, so it was nice to connect with those roots — my great grandparents were from Rogers Park.”

As a bilingual paralegal for NIJC, Hannah supported the organization’s efforts to provide legal assistance to low-income immigrants in Chicagoland. Her work focused on affirmative asylum cases, meaning individuals who were not detained in the immigration system. Hannah helped people apply for immigration statuses like Deferred Action for Childhood Arrivals (DACA), Temporary Protected Status (for refugees of countries affected by war or natural disaster), and U visa (for victims of crimes). About half of her week was spent doing intake with potential clients, and the other half was spent on case work.

Understanding the U.S. immigration system is difficult from a technical perspective, but the role required a lot of emotional labor, too. Many of the clients who came in seeking help had to be told they had no options — they would live in fear of deportation for the rest of their lives. Hannah also often worked with women who were survivors of domestic abuse and other forms of gender-based violence, which made them eligible for special visas, reliant on their cooperation and communication with law enforcement.

“My Avodah cohort during that time made that emotional labor possible for me,” Hannah said. “Coming home and having dinner together every night — the support and community of having my housemates there made it possible.”

While service at her placement was challenging, it was also fulfilling. Hannah was grateful to have the opportunity to help those that she could, and the experience helped her figure out what she wanted to do long-term

“I learned so much in just a few months. It was amazing to work so closely with these individuals… but the system is terrible. I thought, ‘What can we do at the local level to make this more bearable for the community?’ The experience made me realize that I needed to be organizing. I left the Service Corps with clarity about my career, which was very informed by what I was doing at my placement.”

Right out of Avodah, Hannah worked on a campaign around felony disenfranchisement, pushing to reinstate voting rights for people with felony convictions. From there, she spent time doing local-level immigrant justice organizing in Virginia with the New Virginia Majority, using her immigration law experience from her Avodah year.

Hannah’s justice journey has now come full circle, with her taking a community organizing role at 9to5 in her home state of Colorado. Hannah and the 9to5 team advocate for climate solutions that center workers, low-income families, and communities of color. She splits her time between federal-level advocacy, as part Colorado’s coalition within the Green New Deal Network, and organizing disproportionately impacted communities at the local level.

A major focus of her community work so far has been supporting mobile home residents. There is a national epidemic of mobile home communities being bought out by mega corporations using government-backed loans, sometimes increasing the rent by as much as 70 percent. Environmental issues also put these families at risk, as many mobile home communities have poor water quality and are located in dangerous flood plains. Hannah was intentional about bringing what she’s learned back to help her local communities.

“I felt very deeply connected with the communities I was working in before, but I wanted to have that experience in the place I was from. I feel very personally invested in solving these problems in Colorado.”

She continues to draw from her Avodah experience and remains close with several of her former housemates. She visits Chicago at least once a year, and hopes to come more often in the future to see fellow Avodah alumni.

“For me, Avodah was the best thing ever. I had an amazing placement, and my house got along really well. Both the career opportunities and the community you get to be a part of are huge. It’s really unique and different from other programs people might be considering after college.”