Jane Yamaykin was a DC Service Corps Member in 2008-2009. She now works as the Associate Director of Engagement & Leadership at the National Council for Jewish Women (NCJW). Jane reflected on the impact her Service Corps participation has had on her life:

Avodah’s theory of change has been a big piece of the story in my life. I continue to keep it in mind as I think about it as a parent and what the future holds for my small human.

Before my Avodah year, I was doing a social justice program in Israel. As that was wrapping up, I was trying to decide what my next steps were going to be. I knew that I wanted to work in DC and to get into the nonprofit world doing direct service. Information about Avodah came my way and I got excited, in part because it meant that I would have housing and wouldn’t have to look for random roommates on Craigslist! I knew they would also be people who were passionate about Judaism and social justice. The Service Corps was an amazing way to come back to the U.S. and dip my toe into DC, as a new location for me, and also into both the nonprofit world and communal living.

My service year really affected my life in so many different ways. One part of that was my placement organization. I got to work for my top choice of the placements, an organization then known as Metro TeenAIDs. I did HIV testing and counseling with young people, as well as a lot of outreach and helping run after school programs. Because Avodah advocates so much for Corps Members to have direct service experience and training and empowers organizations to really lean on Corps Members as full-time staff, I was able to do so much. If I was just applying for entry-level positions without Avodah backing me, my job that year would have looked very different. Also, the person who had been the Corps Member there the year before me was my direct supervisor!

One of the more powerful stories that I can share about my experience that year was one night in the clinic where we were doing walk-in HIV testing. There was a young person who had tested positive for HIV. They were inconsolable, crying and upset, having found out that their life was irrevocably changed. The walls were very thin. A young teen sitting next to me looked over and asked, “Someone just tested positive, didn’t they?” I am so grateful that in that moment I had the training to be able to say, “Let’s talk about how you can prevent testing positive,” even though I was shaken to my core. I was then able to go back to the bayit and talk to other Corps Members who also were in organizations working with folks who were infected and/or affected by HIV and other interconnected issues – I was so grateful to have that support. 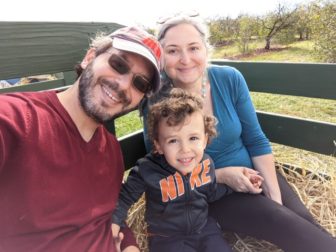 In addition to having a community to lean on after hard days at work, living in the bayit exposed me to other people’s experiences with Judaism. My family immigrated to the U.S. from the former Soviet Union when I was eight. It was wonderful to live in the bayit and learn about other Corps Members’ experiences growing up Jewish which were very different from how I grew up. Like any family, we had our challenges with all of us in one house, but Avodah provided us with conflict resolution skills and other ways to make sure we were prepared to be our best selves in those challenging moments.

During my Avodah year, I was able to make connections at other DC organizations, one of which was Food & Friends – an organization which prepares and delivers meals for individuals living with HIV/AIDs and other life-challenging illnesses. Following my Avodah year, I began working at Food & Friends full time which was not yet an Avodah placement. I made sure during my tenure there that we did create a spot for a Corps Member. The very first Corps Member hired was so amazing, we became fast friends. She was actually at my wedding! So, the connections from Avodah are very real, and they definitely do last.

I later moved into a fundraising role at Food & Friends and then did some fundraising work for Avodah. Eventually I found my way to the National Council of Jewish Women (NCJW) where I’ve come full circle, having realized that the program side of things and leadership development are really where my heart is. I started at NCJW in March of 2020 and was in the office one day before we all transitioned to working remotely. My direct supervisor had also done Avodah, the year before I did. She’s someone I’ve known for over a decade which really helped me with starting a new position during the pandemic.

I have made my life in the DC metro area and, pre-pandemic, was very involved with local events and Avodah alumni networking opportunities. Now, as a parent, I am excited about all the young family opportunities around DC. The first day we left our child at daycare, there was an Avodah alum there dropping off her child, too. Avodah alumni are everywhere!

The Avodah experience is such a powerful tool that ripples far beyond the service year. Even though I studied sociology and gender studies in undergrad, my experience in Avodah helped me to draw more concrete connections about the intersectionality of issues, about social oppression, and how it’s all woven together. It very much shaped my justice lens, as well as my Jewish social justice lens. I think a lot about that as I think about my own child and what I hope to impart to him.