What Wakes Me Up in the Morning

Ryan Gerber is from Teaneck, NJ and attended the College of New Jersey. He spoke about his experience as an AVODAH Corps member at the New York City Leadership Event on June 14, 2011. His remarks follow below. 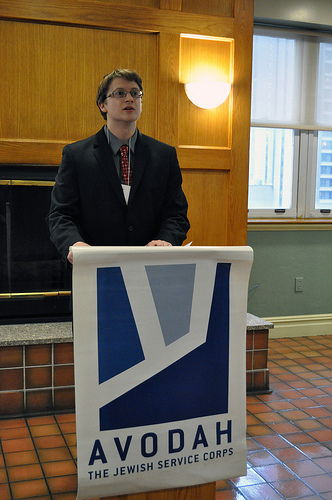 Every morning, when I wake up, I immediately hit the snooze button. But in those nine minutes, between alarms, I contemplate my day. Eventually I relent—I do not call out sick, I do not go back to sleep—I get up and go to work. My motivation is my clients. The inspiring men and women I work with everyday; the people who teach me about like–real life, the people who have gone through more than I can imagine; the people who know that my extension, 5108, is always there for them to call, and I will be at the other end trying my absolute best to help them.

One such inspiring client of mine is Ms. Muhammad. A fifty-eight year-old widowed mother of four, Ms. Muhammad fights tirelessly for her two chronically ill children. “I was not always poor,” Ms. Muhammad told me. In 2008 her world was turned upside down. Her son was killed in action in Iraq, while fighting for US, and she lost her job as a home health aid. Ever since her tough break, Ms. Muhammad has been on and off Public Assistance. This past year has been especially difficult, she told me. At the peak of her hardship, her public assistance case was closed, leaving her without a way to pay the rent, without enough food, and with the fear that her Medicaid case would be discontinued, putting her daughters’ health in jeopardy. As we waited, I thought to myself, “Is this how we treat the mothers of our heroes?”

When the hearing finally got underway, I could tell that Ms. Muhammad was very nervous. The color was gone from her face, and her usual friendly tone had disappeared. Under tough questioning from the judge, she froze. She forgot everything we had discussed before the hearing and began answering questions in a manner that hurt her case. I was able to regain control of the hearing, shift the focus from Ms. Muhammad and onto the problems with the City’s case. I successfully argued that the case should be withdrawn. I’m proud to say that all of Ms. Muhammad’s benefits, representing thousands of dollars, were restored. For Ms. Muhammad, this was a huge victory; it meant one less month of worrying about how she was going to feed her family.

Before the hearing that day, it occurred to me that Ms. Muhammad and I could not be more different. I am Jewish; she is Muslim. I am a third generation American; she is a recent Afghani immigrant. I enjoy the comfort of middle class; she struggles every day. Through the opportunity afforded to me by AVODAH, I was able to learn from Ms. Muhammad, the solemn dignity of difference. Direct client interaction, often with people from vastly different walks of life, is a transformative experience.

AVODAH is more than just a job. AVODAH is about community. My seventeen housemates, colleagues, and friends—my fellow Avodahnicks—are truly what have made my year amazing and unique. The relatively short time that we’ve spent together—living, working and studying—has had an immeasurable impact on me. Sharing this year, and a home, with these individuals has inspired me to always strive to do more and to be a better person.

Living together and working on different yet related urban poverty issues provide us the opportunity to learn from one another. We have learned firsthand about the many challenges facing under-served populations in New York City, as well as about the organizations that are responding to those challenges. We also act as sounding boards for one another, allowing us to come up with creative solutions to tough problems we face at work.

One of my favorite memories from this year was the final day of our fall retreat in upstate New York. After two days of intensive seminars on conflict resolution and very heavy conversations concerning our personal views on the Jewish community and the world, it was apparent that we were all very different individuals. We have come from all over the country and Canada and have lived through a myriad of different experiences, and Judaism has played a unique role in each of our lives. Yet, in the backdrop of a beautiful upstate New York autumn we seemed to come together that day in a very deep way. For some of the Californians in our group it was their first time seeing fall leaves. We took a picture that day which acts as photographic evidence of the fact that no matter our background, and no matter where we end up in life, we will always have the support and friendship of one another. We have made connections to one another that have better equipped us to make concrete change on important societal issues.

AVODAH also gives us the opportunity and, in fact, encourages us to question the world. It was Albert Einstein who said, “We can’t solve problems by using the same kind of thinking we used when we created them.” Through the AVODAH curriculum and programming, we’ve challenged the thinking of the world, we’ve challenged each other, and we’ve challenged ourselves. Had Einstein accepted the assumption that time was constant we would never have arrived at our deeper understanding of the physical world. Together, in AVODAH, we challenge the basic assumptions of our society, striving to arrive at a more just world.

Our experience in AVODAH—while it may be an end in and of itself—is also a beginning. AVODAH is just a footstep in the path we hope to walk for the rest of our lives. Many of us, including Julie at the Medicare Rights Center, Robin at the School for Law and Justice, Elana at NYLAG, Hilary at the Urban Justice Center, and myself, in a new role at NYLAG, will stay on at our AVODAH placements next year. The connections we have made this year will impact us for the rest of our lives. The network of organizations we have been introduced to will be invaluable to our future careers. And, as we complete our year of service, we join the almost 400 alumni of AVODAH who are doing amazing, inspiring work.

Many people ask me, about AVODAH, “where does the Jewish component fit in?” The Jewish component, I say, is what really makes AVODAH special, as far as I am concerned. Judaism goes beyond the synagogue and prayer. What it means to be a Jew transcends the dichotomy between religious and secular life. AVODAH has recognized that being Jewish is prevalent in everything we do. Even in the name AVODAH, meaning both “work” and “worship, it is recognizing that the two concepts are so intertwined that they can only truly be expressed by using the same word. As Rav Kook, the influential 20th Century Rabbi said, “The truly righteous do not complain about evil, but rather add justice; they do not complain about heresy, but rather add faith; they do not complain about ignorance, but rather add wisdom.” Being a Corps member allows us to add wisdom, faith and justice to our society.

Now that the year is almost over, and it is coming time for all 18 of us to move on, I have had some chance for reflection. At the end of every step in my life, I always ask one of life’s timeless questions, is the juice worth the squeeze? And the answer about my year in AVODAH is unquestionably yes! From my clients who inspire me, to my deeper understanding of myself and the world, to (most importantly) the group of 17 courageous, inspirational, smart, caring, intelligent and diverse people I live with, you have all made the juice as sweet as the apples and honey that we shared together for Rosh Hashanah only nine short months ago. Thank you.