The Empowerment of “Power With”

Posted on January 30, 2014 by AVODAH
By Kayla Glick
Three DC Avodahniks recently  had the delight of being part of the MLK day service at Temple B’nai Shalom in Fairfax, VA. Kayla Glick shared her reflections on what it means to create power with others in order to create community in which we all participate in the growth of the world. We wanted to share her beautiful words with you. 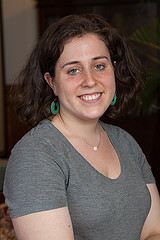 Shabbat shalom! My name is Kayla, and in addition to being an AVODAH corps member this year, I’m a community organizer at Jews United for Justice. JUFJ leads Washington-area Jews to act on our shared Jewish values by pursuing justice and equality in our local community. I’d like to ask you to take a second to notice your own reaction to the word power. What comes to mind? Is there a specific person that is evocative of power for you? Does it have a negative or positive connotation?Growing up, I had negative associations with power. Power sounded dangerous, and even selfish. It evoked images of corruption and oppression. When I thought of power, I only thought of zero sum power—if one person has more, another person necessarily has less.

Two summers ago, my understanding of power and power dynamics became a little more nuanced. I was working on an urban farm in Berkeley, California. All the food we grew was donated to people who lacked adequate access to fresh food, and every week we ran a free food stand at the farm. The staff at the farm was very intentional about using the space to re-envision power dynamics. What could have been a situation that perpetuated a power dynamic of us and them, with one group simply giving charity to another group, instead became a space that sought to foster community between those who worked on the farm and those who came to the food stand, by involving the recipients in community events and farm programming. Some of them even became volunteers in growing the food. The people who visited our farm stand became our partners and community members, instead of the people we served.

Exploring my own role in questions of power and privilege, and the assumptions I held about people living in poverty that summer led me to AVODAH. I wanted to continue to explore social justice, and I was particularly inspired by JUFJ because it seeks to address change on a systemic level. At JUFJ, through learning about community organizing, my understanding of power has changed even further. In organizing, we think of power as neither an inherently negative or positive thing—instead, we seek to move from situations of people having power over other people, to situations of people having power with other people. When a community develops relationships between its members and builds power together, they can make real change that no one person could make alone.

Right now, our focus is largely on economic justice through the campaigns we work on. In DC, we recently won our campaign to expand access to paid sick leave to all workers in the District and raise the minimum wage to $11.50 an hour by 2016, indexed to inflation. In Maryland, we’re working on a campaign to raise the statewide minimum wage to $10.10 an hour, with an increase in the tipped minimum wage, and indexing to inflation. When we organize for legislative change, we’re aiming for a power shift: a shift in power from a model of alleviating poverty through charity and public benefits (though these are important too) to passing laws that address root causes and allow hardworking people experiencing poverty to support themselves. Moreover, as we fight for strong, progressive bills, we work in partnership with and follow the leadership of affected populations, so that our goals are not being determined solely by people already in a position of power.

When I read this week’s parsha, Parshat Yitro, I was excited to see this idea of re-envisioning power clearly represented in the story. At the beginning of the parsha, Moshe is the sole judge and leader of the Israelites. His father-in-law, Yitro, advised him that carrying that power on his own was a detriment and burden to both him and the community, and that he should delegate and empower others in his community to share in leading. It was moving to me that my own, thousands-year old tradition models the importance of a community building power together. Moshe is represented as one of the most iconic and holy leaders the Torah has to offer, but the community sharing responsibility for its future together was stronger than he could be alone.

Kayla Glick is from Stamford, CT, attended Tufts University and is a Community Organizer at Jews United for Justice.