The Day I Received an Email From Ruth Bader Ginsburg

From this email, I learned that Ruth Bader Ginsburg – yes, that Ruth Bader Ginsburg – had designated a gift to Avodah upon her receiving the Gilel Storch Award, a prize for her outstanding human rights contributions. I was stunned by such an incredible and humbling honor. The weight of her legacy was palpable when we later received a signed letter on U.S. Supreme Court letterhead, in which she declared that “Avodah is respected by people across the political spectrum for its engagement in real tikkun olam.”

Such a moment was only matched this year, during Avodah’s annual staff retreat, when I was notified that Justice Ginsburg had made a second designation to Avodah upon receiving the Berggruen Prize for Philosophy and Culture for her “ideas that changed society.” This time, our entire staff was together to share in the excitement of such a moving and inspirational gift. After her passing, we had tears in our eyes when we learned that Justice Ginsburg had allocated part of the prize money she had been awarded by the National Constitution Center to Avodah. This was the third gift Justice Ginsburg had made to Avodah and we could not be more honored to have been “among the institutions and organizations that meant the most to her.” We cannot imagine a more meaningful gift and with her blessing, we are even more inspired to follow the words she hung in her chambers, “Tzedek, tzedek, tirdof” — Justice, justice, you shall pursue.

Out of deep respect for her position and judicial ethics rules on the highest court, we quietly accepted these designations and directly shared our immense gratitude with Justice Ginsburg with a personal letter and video of thanks from our Corps Members, which we are pleased to also share with you now.

Like many of you, we are heartbroken by the passing of Justice Ruth Bader Ginsburg, and our hearts go out to her family, friends, law clerks, and clergy. Justice Ginsburg was an American hero, women’s rights champion, and a true eshet chayil – a woman of valor, who lived out her Jewish values in her work each day, and throughout every phase of her life. She was more than a hero to those of us at Avodah and we were honored to call her a supporter and friend.

It was our deepest honor to have been able to express our gratitude for her support, and we hope that it gave her joy during an especially difficult time. We know it meant a lot to our Corps Members, who were able to personally thank one of their greatest heroes.

Avodah Board Member Rabbi Lauren Holtzblatt (pictured right), whose husband is a former clerk of Justice 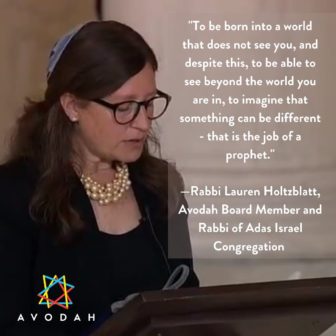 Ginsburg, opened the memorial ceremony on Wednesday in the Great Hall at the Supreme Court. Rabbi Holtzblatt, who leads Adas Israel Congregation in Washington, D.C., said Ruth Bader Ginsburg was the kind of leader who saw the world as it ought to be and worked to make that vision a reality.

Justice Ginsburg took action to uphold justice in service to every person in our nation – and when the sound of the shofar rang out on Rosh Hashanah, her call for action stirred in our souls – it is now our time to act.

We will continue to carry out her legacy. May the memory of Ruth Bader Ginsburg forever be a blessing. You can watch the full memorial service, including Rabbi Holtzblatt’s eulogy, here.