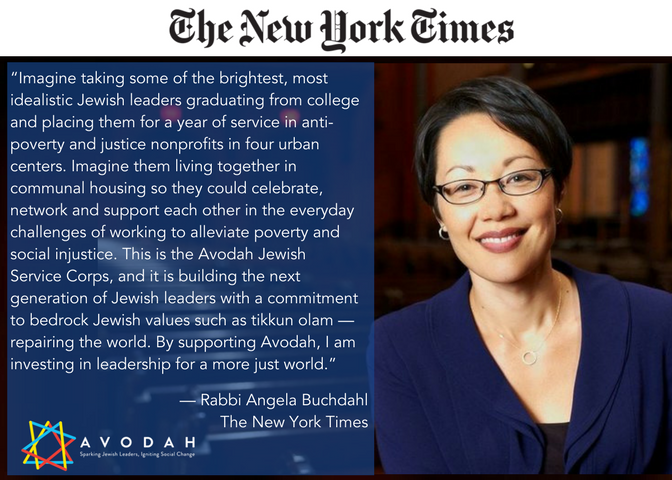 Avodah was featured in The New York Times on #GivingTuesday as one of several prominent organizations well-known New Yorkers are giving to this holiday season. Avodah is listed fourth in the article (under Lin-Manuel Miranda’s pick and a few others). Here’s what Rabbi Angela Buchdahl, Avodah Board Member and Senior Rabbi at Central Synagogue, had to say about making Avodah her New York Times #GivingTuesday pick.

“I wrote this piece today in The New York Times because I believe in the work of Avodah. By supporting Avodah, I am investing in leadership for a more just world.”

In the article, Rabbi Buchdahl illustrates Avodah’s mission to create new generations of Jewish leaders to help repair the world:

“Imagine taking some of the brightest, most idealistic Jewish leaders graduating from college and placing them for a year of service in anti-poverty and justice nonprofits in four urban centers. Imagine them living together in communal housing so they could celebrate, network and support each other in the everyday challenges of working to alleviate poverty and social injustice. This is the Avodah Jewish Service Corps, and it is building the next generation of Jewish leaders with a commitment to bedrock Jewish values such as tikkun olam — repairing the world. By supporting Avodah, I am investing in leadership for a more just world.”

Avodah Jewish Service Corps Members have contributed more than 1.7 million hours of service and they touch the lives of more than 50,000 people each year struggling with poverty. By working on issues of education, hunger, housing, immigration, health, legal services, domestic violence, and more, Avodah is eliminating the root causes of poverty and creating new generations of Jewish leaders.
To contribute to Avodah’s work, please visit our donation page.