In mid-August, the Taliban regained control of Afghanistan, further worsening the Afghan refugee crisis. At the same time that advocates and organizations sought to help arriving Afghan families, Hurricane Ida was rolling into Louisiana, displacing thousands. 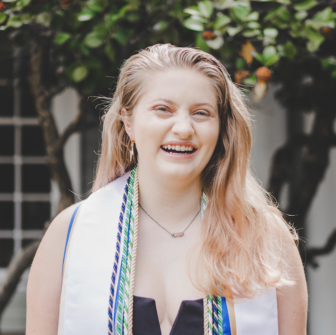 Avodah postponed the arrival of our New Orleans Service Corps cohort due to the storm, but despite the delay, incoming Corps Member Katie Schmidt had already begun to help her placement organization, Home is Here NOLA, serve immigrants remotely. She serves as the Community & Logistics Coordinator for the organization, which is dedicated to supporting immigrants and refugees through housing and hospitality.

“It’s an interesting position to be in because some people who already lived in New Orleans don’t have housing themselves right now,” Katie says, “We are working to figure out how to help our city because if our city hasn’t been helped, we can’t help anyone else. We are gifted that we have gotten a lot of interest from people who want to house Afghan refugees, but that poses questions, too. ‘How do we do that? How do we train them?’”

Katie was particular about her Service Corps location, having only applied to be considered for our New Orleans placements. Her interview with Home is Here NOLA confirmed she’d made the right decision. She says the conversation she had with Julie Ward, who is now her supervisor, gave her goosebumps.

Part of a ‘three woman team,’ Katie’s role has already encompassed a wide range of tasks, from helping develop curriculum for a college course studying the Afghan refugee crisis to translating videos into English. Hearing the stories of the individuals they are helping has greatly impacted how she thinks of her own place in life.

“Some of these people are my age and have gone through these beyond-life-altering changes,” Katie says, “Losing your country, fleeing for your life — it’s crazy. The work Home is Here NOLA is doing to secure immigrants’ release from detention centers and support them here in this community is amazing to be a part of.”