Discovering My Identity with Avodah by Alumna Jessica Schaffer

Posted on June 19, 2019 by Avodah
The following speech was originally given by Avodah Alumna Jessica Schaffer at Partners in Justice in Chicago on May 16, 2019.

It was happenstance that I joined Avodah as a Corps Member in 2007. A relative of mine who I hadn’t seen in years happened to be in Montreal, where I was living at the time. She was around my age and my father insisted that I take her to lunch. It was May, and I was just about to graduate from college. The question on the tip of everyone’s tongue was: ‘what comes next?’ I would rattle off a series of talking points and would get a nod or a smile. No one seemed to offer any concrete advice. Except Andrea from Winnipeg. Andrea from Winnipeg asked me if I had ever heard of Avodah. I am forever indebted to Andrea because Avodah changed my life. 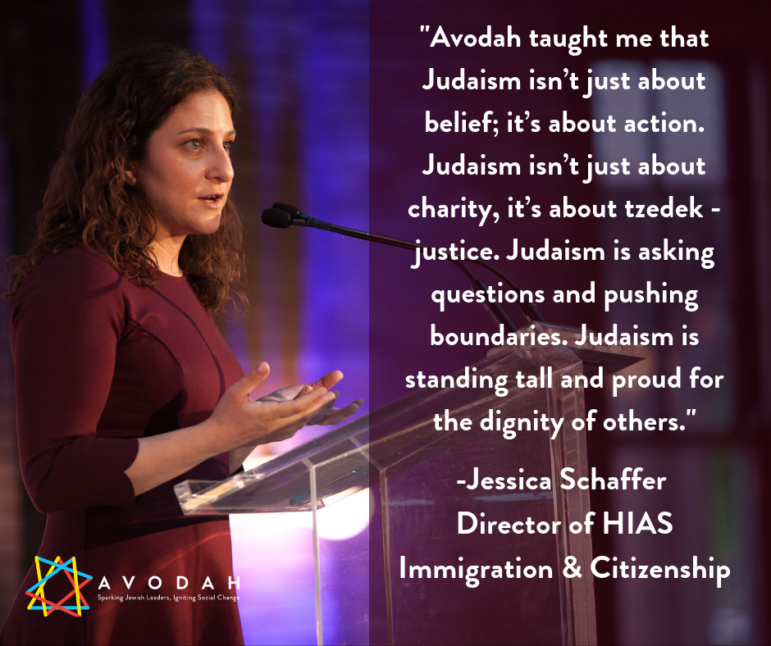 I was raised in a Jewish community that didn’t talk about social justice – it wasn’t something that was prioritized and certainly wasn’t offered as way to express one’s Judaism. Being Jewish was about observance. It was about prayer and service to God and fulfilling specific, prescribed – and, frankly, gendered – roles around rituals. At Passover Seders, I would sit, stoic, as my Zaide rattled off every word of the Haggadah. It didn’t matter that I didn’t always understand what was being said – it didn’t matter that there were contemporary themes and conversations that might have made the Seder more relevant or meaningful; this was the way it was done.  My Judaism was about ‘how things had always been done’. And I felt a profound responsibility to maintain that status quo.

So imagine the shock when I moved to Chicago to join Avodah and encountered a household of other Jews who were all about shaking up the status quo. They were eager to discuss the purpose of our practices and the meaning behind our rituals. They were eager to engage in conversation about Jewish identity and values, and power and privilege, and race and culture. Needless to say, my world was rocked.

And of course, simultaneously, I was navigating the also new experience of working full time as a Corps Member in an anti-poverty agency. My Avodah placement was at the Ethiopian Community Association of Chicago, which is both a refugee resettlement agency and an Ethiopian cultural center. It was the first time I engaged in non-profit work with refugees, and I absolutely loved it. I loved connecting with people from all over the world – learning about their backgrounds and culture and values. My biggest struggle, truly, was finding a way to politely decline the breakfast of fish stew often offered to me when I met with clients in their home first thing in the morning.

Ironically, when I accepted this placement, it didn’t occur to me that the refugee experience is personal for me. I am the daughter and granddaughter of refugees. My paternal grandparents fled Germany in 1939 and traveled to Shanghai, where they lived for a decade before being resettled to San Francisco. My maternal grandparents met in the Bergen Belsen internally displaced persons’ camp when they were relocated there after having survived the war. My mother was born there. She and her parents were resettled as refugees to Canada when she was three years old. Had it not been for Avodah, I don’t know that I would have made what is now an undeniable connection between my family’s history and my work.

I have now spent most of the last 12 years working with refugees and immigrants. Particularly in this moment in our country’s history, I feel privileged to be at the helm of HIAS Immigration & Citizenship, part of JCFS Chicago’s family of services. At HIAS, we support and stand up for the rights of all immigrants and refugees, regardless of faith or religion or national origin. Avodah taught me to see this work as Jewish at its core.

It is an honor to stand in front of you all to share my experience and express my gratitude. Thank you, Avodah, for this recognition but most of all, thank you for being a pillar in the Jewish community, continuing to impact young Jews as they journey to discover themselves and identify their place in bringing change to our communities and our country.  You certainly gave me the tools to pave my path, and for that I am so grateful.