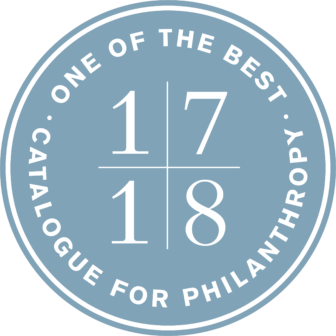 WASHINGTON, DC — June 12, 2017 — After a careful vetting process, the Catalogue for Philanthropy: Greater Washington has selected Avodah to be part of the Class of 2017-18.  Avodah has undergone an extensive review process, and has met the Catalogue’s high standards. Potential donors can be confident that the nonprofits in the Catalogue are worthy of their support.  Avodah’s mission is to strengthen the Jewish community’s fight against the causes and effects of poverty in the United States. We do this by engaging participants in service and community building that inspire them to become lifelong leaders for social change whose work for justice is rooted in and nourished by Jewish values..

This year the Catalogue celebrates its 15th anniversary: since its inception it has raised $38 million for nonprofits in the region. It also offers trainings, neighborhood-based opportunities for collaboration, and a speakers series for individuals who want to learn about and engage with the needs, challenges, and accomplishments of our shared community.

Reviewers helped select 76 charities to feature in the print edition, 34 of which are new to the Catalogue this year.

“People want to know where to give and they need trusted information. Based on our in-depth review, we believe that Avodah is one of the best community-based nonprofits in the region,” said Barbara Harman, founder and president of the Catalogue for Philanthropy.

“Our selection in the Catalogue for Philanthropy solidifies Avodah’s position as a trusted nonprofit, committed to social change,” said Jill Hertzler, Avodah DC Community Director. “We are thrilled to be a part of the amazing 2017 cohort.”

The Catalogue believes in the power of small nonprofits to spark big change.  As the only locally-focused guide to giving, its goal is to create visibility for the best community-based charities, fuel their growth with philanthropic dollars, and create a movement for social good in the greater Washington region. The Catalogue charges no fees; it raises funds separately to support its work.