Rachel Davidson (Chicago Service Corps, 2006-2007) is the Managing Attorney for Policy and Special Projects at The Door in New York City and the founder of the End SIJS Backlog Coalition, which recently published its first report on the Special Immigrant Juvenile Status backlog, featured by TIME. We spoke with her about her Avodah experience and recent work to make change in the U.S. immigration system: 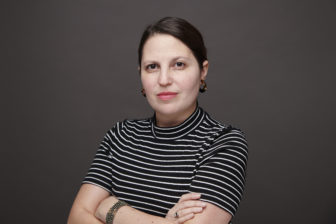 More than 44,000 abused children are currently trapped in an immigration backlog for those with Special Immigrant Juvenile Status (SIJS). This legal limbo can last for years, leaving them unable to work, afford to attend college, and sometimes forcing them into foster care. Avodah alumna Rachel Davidson is tackling the issue head on.

Rachel is the founder of the End SIJS Backlog Coalition, now made up of over 70 organizations nationwide pushing the Biden Administration to change SIJS policy and Congress to change the laws around the immigration status to fix a major disconnect between the SIJS process and the green card visa allocation system.

SIJS is a status that was designed by Congress in the 1990s to provide permanent legal protections to immigrant children who have been abused, abandoned, or neglected by a parent. Once youth are granted SIJS status, they become eligible to apply for permanent residence (a green card). The SIJS backlog stems from a major disconnect between the SIJS process and the green card visa allocation system. The SIJS green card application is considered “employment based,” despite it having nothing to do with a child coming to work in the U.S. Employment-based visas are subject to limitations — only a certain number of people per country per year are eligible to stay in the U.S. using employment-based visas. As a result, tens of thousands of abused or abandoned youth from Central America and Mexico are granted SIJS, told they are eligible to apply for a green card, and then must wait in legal limbo for years before they can actually submit an application for permanent residence and work authorization.

“They can’t work, they can’t access federal financial aid for college, and many of them can’t leave foster care because they would just be discharged into homelessness… and there is a disparate impact on Latinx youth of color from Central America and Mexico. No one was working on this issue – it was just considered the reality,” Rachel explained.

Rachel’s passion for working with and advocating on behalf of youth dates back to her Service Corps experience. Rachel was part of Avodah’s first Chicago cohort and served with Alternatives, a youth development organization, as a Restorative Justice Specialist. She spent her service year working with youth facing suspension, as part of Alternatives’ work to reimagine the school discipline process.

“I had lived outside of the U.S. a lot of the time while I was growing up, so I didn’t have any understanding of the segregation and racism within the school system here. I didn’t understand the relationship between the school discipline process and incarceration levels,” Rachel said. “It was a really important experience, in terms of my understanding of racism and white supremacy at a structural level, and on a personal level with regards to my own white privilege. I also started to work with young people for the first time. I realized how much I loved working with teenagers, and how personally meaningful it could be. Young people are in a process of becoming, and in it they hold you accountable for the ways you show up. I had the opportunity to be in transformative moments with young people — those moments were transformative for me as well.”

After Avodah, Rachel relocated to New York City for a position working with youth who had been in contact with the criminal legal system at the Harlem Community Justice Center. She went on to pursue a master’s degree in International Relations from the Universidad del Salvador in Buenos Aires and served as a Rotary International Peace Fellow. When a family member was diagnosed with cancer, she returned to the U.S., where she became increasingly involved in justice work through a Jewish lens. She helped facilitate service learning programs for American Jewish World Service and served as Avodah’s DC Program Director for a time.

Eventually itching to break out of the nonprofit space, Rachel applied and was accepted to law school at her alma mater, McGill University. “I had never planned on being a lawyer, but I was angry about the injustice and racism of the legal system. I thought, ‘If I get in, then I’ll go but if I don’t, I’ll think about different pathways to work on these systemic issues.’”

While studying for the bar exam, she took a position working for Bronx Freedom Fund doing bail activism and began volunteering with a pro se asylum clinic, helping immigrants prepare to represent themselves in court and in their immigration applications. Recognizing the need for more attorneys knowledgeable about immigration law led her to her The Door, which specializes in comprehensive youth development services. There, she took on a hefty caseload of affirmative cases and deportation defense work, including SIJS cases and at the start of the COVID-19 pandemic, she launched the policy arm of the organization’s legal services center.

Rachel honed in on education and advocacy around the SIJS Backlog including coordinating a research effort to examine the impact of this particular flaw in the immigration system. “I wanted to publish a report on the impact that forcibly waiting is having on these young people at such a formative time in their lives. I started wondering, ‘is there a way to actually change this?’ I knew I couldn’t do this by myself.”

In December, Rachel published the report, “Any Day They Could Deport Me”  Over 44,000 Immigrant Children Trapped in the SIJS Backlog, in partnership with The End SIJS Backlog Coalition, The Door, and Professor Laila Hlass of Tulane Law School. The data included in the report was only made accessible after Rachel and Professor Hlass sued the U.S. government for denying their expedited Freedom of Information Act (FOIA) request — a sign that the government does not like attention being drawn to this issue.

“What we found is that over 44,000 kids are impacted by this issue,” said Rachel. “And a lot of these kids face deportation even though they have SIJS, because immigration judges and government lawyers take the position that their permanent residence is too far in the future to be a viable form of immigration relief. The state court says, ‘It’s not in your best interest to go back,’ and the immigration agency grants them SIJS in agreement, but then we see another arm of the same agency pushing for removal orders. Congress needs to exempt these kids from the employment-based visa caps and, in the meantime, the Biden Administration has to update policy to protect these children and grant them work permits while they are in limbo.”

The first-ever bill addressing the SIJS backlog was introduced in late 2021, and Rachel anticipates at least two more over the course of the next year. If you’d like to get involved and advocate for the end of the SIJS backlog, you can join the coalition by signing up here or contact your member of Congress to ask what they’re doing about this issue. Rachel stressed that people do not have to be experts in immigration law to get involved.

“Right now, we especially need people with experience in grant writing, communications, youth organizing and bipartisan advocacy. We welcome you. We need to change the story that’s being told about these kids.”

To learn more about the SIJS backlog, you can also check out Rachel and Professor Hlass’ op-ed for Ms. Magazine, as well as coverage from TIME.