Laura Landau (Chicago 2012-2013) grew up in Providence, RI, and attended Barnard College and the Jewish Theological Seminary, where she majored in Urban Studies and Jewish Art respectively. In her Avodah year, she served as the Wellness Coordinator at Friedman Place, a residence for blind and visually impaired adults. After Avodah, Laura moved to New York and worked as a community organizer. She completed her Master’s in City and Regional Planning at Pratt Institute in 2016, and is currently working on her PhD in geography at Rutgers University.

For social scientist Laura Landau (Avodah Service Corps, 2012-2013), living communally in the Avodah Chicago Bayit was an experiment that would impact her life and career for years to come.

Laura majored in urban studies in college and after years of studying academic perspectives, she was ready for hands-on experience in addressing social issues in urban life. Growing up steeped in the Jewish world and having a roommate who had done the Avodah Service Corps in Washington, D.C., she had known about the Avodah Service Corps program for years and decided to apply.

She matched with an organization in Chicago, a supportive living facility for adults who are blind or have visual impairments. There, Laura had the chance to serve on a nursing team doing medical coordination. In her role, she drove residents to medical appointments and acted as an advocate to help with communication. She also lent her skills to administrative duties and programming, including workshops teaching residents how to do self-breast exams, community engagement projects such as weaving work, and crossword puzzles, which would be read out loud as a group, and that the residents would do completely by memory.

“The work was very different from anything I’ve done since. It gave me a chance to work on a lot of people skills important for working with any population, showing compassion through non-visual cues. It helped my communication skills in general,” she said.

Back in the bayit, Laura put on her researcher hat as both a participant and observer of communal and pluralistic living. “I loved living communally. My research now relates to cooperative decision-making. Getting that experience in the Avodah bayit definitely impacted my future interests. I was fascinated by the interpersonal dynamics – it’s really intriguing to take a step back and be an observer. It can make it less fraught, even if we’re talking for four hours about what temperature to set the thermostat at. That is the hard skills part of what Avodah taught me. It put me in a situation where I was able to learn about group process and facilitation,” she said.

Of course, living in the bayit with a dozen 20-somethings all interested in the intersections of Judaism and justice, catalyzed deep friendships too. 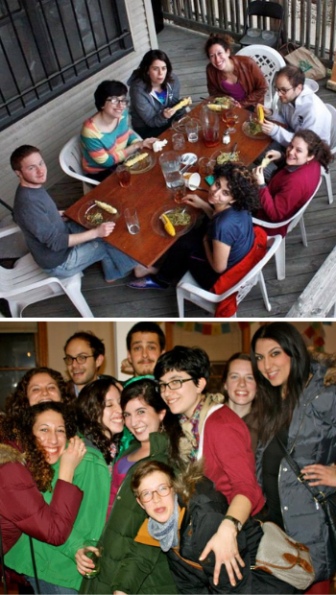 “We were pretty consistent about community Shabbat. Every week, anyone who was home would join together for Shabbat dinner. We threw a really great Purim party and did a lot of other fun activities around Jewish holidays,” she said. “We used to do yoga in the living room every week and we had a vegetarian kitchen that I was really proud of. We kept to the same shopping and cooking rotation pretty much the whole year. I became a much better cook over that year. And it was special coming home and having someone else make dinner for you.”

After completing Avodah, Laura worked for a year in community organizing for a synagogue in Brooklyn. “It was a natural progression from my Avodah year,” she said. There, she coordinated weekly volunteer opportunities, organized against pedestrian traffic deaths with congregants, and worked on some major environmental initiatives such as composting and solar. Through it, she connected with different government agencies, such as the city’s department of sanitation, and continued to draw upon her academic background in urban development to deepen her understanding of the hurdles in big behavioral changes.

Realizing the impact government agencies can have, she continued her interests in urban studies and received a Master’s in City Planning while focusing on public space and disaster response. She then worked as researcher with the New York City Field Station of the USDA Forest Service before returning to school to pursue a Ph.D. She has published several articles, including with her Forest Service colleagues (view her work here and here).

When Covid hit, her work pivoted to focus on this new and unprecedented disaster. “Right now I’m researching COVID responses from existing civic groups as well as emergent mutual aid groups. Mutual aid provides an alternative framework to traditional disaster response—one that is predicated on solidarity, not charity. The last two years have seen a monumental rise in the number of mutual aid groups forming to respond to the social vulnerabilities highlighted by the pandemic. I think that’s great, but I want to look more closely at the impact these groups are having in their communities, and at the gray space in between ideology and practice,” she said of her current research.

As her career evolves, Laura said that the Avodah community has continued to be a nexus of support. In 2015, Laura was recognized as an Avodah Partner in Justice. She serves as an alumni interviewer for prospective Avodah Corps Members and is an active member of the NYC Avodah book club. “I have the support of a community that respects the work I am doing and understands how it relates to social justice values.”

As for future Avodahniks, Laura shared this advice:

“Do it. If you are thinking about the role you want Judaism to play in your life and your work, Avodah is a great place for you. Go into it with an open mind. And if you can put on your social scientist hat and play the role of observer, you are sure to have an enlightening experience!”